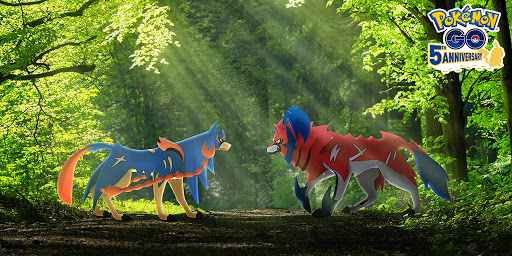 This has been unlocked.

Hoopa’s mischief from Pokémon GO Fest 2021 continues with the final part of our Ultra Unlock event—Part 3: Sword and Shield! No one could have predicted that Pokémon originally discovered in the Galar region of Pokémon Sword and Pokémon Shield would be making their Pokémon GO debuts!

The final part of this year’s Ultra Unlock will feature the Pokémon GO debuts of two Legendary Pokémon first found in the Galar region, Zacian and Zamazenta, in their Hero of Many Battles forms! It appears that the one who brought them to Pokémon GO was none other than Hoopa, which recently caused mischief during Pokémon GO Fest 2021. Alongside them, Skwovet, Greedent, Wooloo, Dubwool, and Falinks will be arriving in Pokémon GO. If you’re lucky, you might even find a Shiny Galarian Meowth, a Shiny Galarian Farfetch’d, a Shiny Galarian Weezing, or a Shiny Galarian Stunfisk!

Skwovet and Wooloo will be appearing more frequently in the wild! You can also look forward to finding Galarian Darumaka, Trubbish, and more! If you’re lucky, you might encounter Falinks!

Due to a bug causing Falinks to appear distorted, Falinks will be replaced by Machamp

Zacian in its Hero of Many Battles form will be appearing in five-star raids. You can also look out for a Raid Hour event featuring Zacian happening on Wednesday, August 25, 2021, from 6:00 p.m. to 7:00 p.m. local time.

Due to a bug causing Falinks to appear distorted, Falinks will be replaced by Gengar.

Zamazenta in its Hero of Many Battles form will be appearing in five-star raids. Look out for a Bonus Raid Hour featuring Zamazenta happening on Monday, August 30, 2021, from 6:00 p.m. to 7:00 p.m. local time.